Hello to one and all,

For the uninitiated, this Song of the Week malarkey is pretty much self explanatory. Should you wish to send on one of your own recommendations, feel free…

This week’s SOTW is a proto-punk anthem by the New York Dolls:

The band were formed in 1971, but didn’t release anything until 1973. Along with their forerunners, The Stooges and the MC5 and later, Television (formed in 1973), they were the innovators of the new punk sound & attitude, before it was even called ‘punk’. Their transvestite look influenced the New Wave of the early 80’s, but they should not be held directly responsible for the hairstyles of Flock of Seagulls. Whatever their influence on punk and onwards, at the time they provoked extreme reactions and strong opinions to say the least. In 1973, the magazine Stereo Review compared their guitar playing to the sound of lawnmowers. 🙂 A Creem magazine poll in 1973 landed them with wins as the best and the worst new group of that year (Wiki). They’re a bit like that kit kat ad from the 80’s: “You can’t sing, you can’t play, you look awful… You’ll go a long way.” 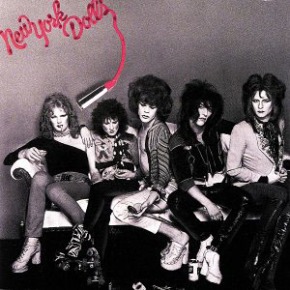 Only they didn’t go a long way. They were the face of punk, but they never really had any hits or sold many albums. There was a lot of interest from record companies at the time, but due to a combination of their sloppy abrasive sound, their controversial look and some counter-productive marketing by Malcolm McLaren around the time of their second album, Too Much Too Soon (1974), most of the big labels were scared off and they never really made it outside of New York. It was MacLaren’s idea to dress them in tight red leather with the Soviet Union flag as a backdrop, which didn’t go down too well in Conservative American circles (for some reason). Pretty much killed their popularity stone dead. There was also the fact that two of the band were junkies and didn’t want to stray too far from their dealers, which limited the range of their tours. Mercury Records dropped them after the second album and then two of their members, guitarist Johnny Thunders and drummer Jerry Nolan left before a concert tour. The band split in 1977.

I love this quote… The New York Dolls, in their own words, “single handedly lowered the standards of an entire industry”.

Johansen again: “It doesn’t bother us when people say we can’t play. When we met we actually couldn’t.”

Their influences ranged from The Velvet Underground and the The Rolling Stones to T-Rex’s Marc Bolan, Glam, early Rock n’ Roll, vintage Rhyhtm & Blues and early American girl groups. While they in turn influenced everyone from The Ramones, The Smiths, The Damned, Guns n’ Roses, The Clash, Motley Crew and Kiss. In 1981, a young Stephen Morrissey wrote a biography of the band.

They were the original inspiration for the Sex Pistols, and McLaren originally wanted two of their members to come to London to be in his new group. The newspaper/magazine ads for the Pistols read as so:

The song Trash is a simple ‘love in the gutter’ anthem with the unmistakeable NYD sound, that no-one else can really pull off. It’s a hidden gem from their classic debut album (1973) that combines Beach Boys-esque harmonies on the chorus with a Bo Diddley rhythm on the verse. The last part totally rips off Mickey & Sylvia’s 1957 Love is Strange, starting with “Uh, how you call your lover boy” and into the “Trash, oh oh, oh sweet baby, you’re the one”, which is virtually identical to the end of Love is Strange only more upbeat. So totally shameless theft then. I also heard somewhere that the background harmonies on the chorus were lifted from a choral piece, or some famous opera piece, but I couldn’t find any mention of it online. If anyone knows, drop me a line…

Here’s a link to Love is Strange for comparative porpoises.

Anyway, they reformed in 2004 at the request of Morrissey minus three members (Murcia, Thunders & Nolan, who had all passed away) . The bassist Arthur ´Killer´ Kane died from luekemia a couple of months later. The two remaining members have since released two albums with three new musicians, One Day It Will Please us to Remember Even This, and then Cause I Sez So, which includes a reggae version of the song Trash.

One thought on “Song of the Week 6: New York Dolls – Trash”