This weeks Song of the Week is another “in the gutter” love song of sorts: Street Hassle by Lou Reed, from the album of the same name. It’s a bit of an epic. More like a short film or a play than a song. It clocks in at over 10 minutes, but don’t let that put you off!

You might remember the conversation between Sick Boy and Renton in the movie Trainspotting about whether Lou Reed’s solo stuff was shite compared to what he did with the Velvet Underground. Well, maybe Sick Boy had a point, or maybe he was just talking shite. This song is right up there with Lou Reed’s best work. There’s nothing else quite like it. 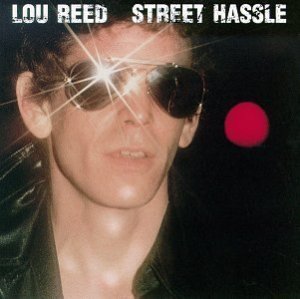 The song is divided up into three parts:

In the first part Lou describes a scene where a woman, Waltzing Matilda, picks up a male prostitute.

Part two sees a dealer giving some pretty blunt streetwise advice about what to do after the overdose and death of a woman at a party. It’s pretty clear that this woman is the same Waltzing Matilda from the first part.

The next part starts with Bruce Springsteen (who was in the studio next-door at the time) giving a short monologue about “tramps like us”. It ends with Lou Reed bearing his soul about the break-up of his own relationship, or maybe he’s just in character again. Hard to tell with Lou.

It’s brutal, it’s sad, it’s real, it doesn’t pull any punches. Not for the faint-hearted. Here’s what Reed said about what he was trying to achieve with the song: “I wanted to write a song that had a great monologue set to rock. Something that could have been written by William Burroughs, Hubert Selby, John Rechy, Tennessee Williams, Nelson Algren, maybe a little Raymond Chandler. You mix it all up and you have ‘Street Hassle’.”

In the late 80’s while everyone else was discovering the wonders of the gated snare drum sound, a psychedelic English band by the name of Spacemen 3 (Jason Pierce/J.Spaceman, later of Spiritualized and Peter Kember/Sonic Boom) were experimenting with drone music, minimalism, feedback and lots and lots of drugs.

They wrote a song called Ode to Street Hassle, which uses the same “Waltzing Matilda”  riff, creating something new out of it. It’s from their classic second album, the aptly named, The Perfect Prescription.

That’s all for this week. Next week we’ll visit the 21st Century. 🙂

4 thoughts on “Song of the Week 7: Lou Reed – Street Hassle”